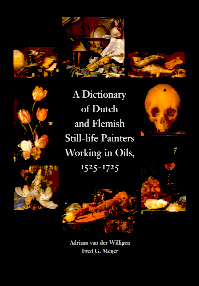 The proliferation of still life in the seventeenth century in the Netherlands, both in the northern provinces of the Dutch Republic and in the region around Antwerp, is a well-known phenomenon to both scholars and a large and appreciative public. One need only think of the numerous exhibitions of Dutch and Flemish still life and the record sums paid at auction for top pieces of this genre in recent years to appreciate its broad appeal. However, despite the wide exposure of these paintings, little is known about most of the artists responsible for them.

In their concise dictionary, Adriaan van der Willigen and Fred Meijer provide brief biographies of still life artists, from the famous to the obscure, and list their signed works in an attempt to clarify the record of who painted what and, ultimately, to foster an accurate picture of the production of still life in the period under study. In handling and legibility this dictionary is much like Thieme-Becker, only focused solely on Dutch and Flemish still life.

The book is enriched by Van der Willigen's painstaking research (the author sadly died before the manuscript for this book was complete), which is complemented and refined by Fred Meijer who, as curator of Old Netherlandish Painting in the Netherlands Institute for Art History (RKD) in The Hague, makes the most of his access to that institution's incomparable archives. In their introductory notes the authors state: "this volume does not aspire to be a 'Corpus' but merely a 'Codex'". As such it will be a disappointment to those seeking a survey of still life, but in the hands of those doing serious research in the field it is an important tool.

As might be expected with such a large project in such narrow confines (232 pages) the authors make liberal use of abbreviations and codes. Thus, in the lists of paintings, for example, "Washington, D.C." means "National Gallery of Art, Washington", while "Washington-Heinz" refers to the "Heinz collection" in the same city. Fortunately reference lists of museums and collections, as well as galleries and dealers, along with a bibliography of pertinent exhibition catalogues, articles and books are provided at the front of the book to clarify the reader's potential confusion.

The same cannot be said, however, for the scheme by which the authors have divided the lists of still lifes. Although largely sensible - the schema includes the clearly defined categories flowers, fish, barn, plants, game, vanitas and trompe l'oeil - Van der Willigen and Meijer introduce a measure of uncertainty by largely defining everything else as "fruit etc." While the authors explain their decision in the introductory notes, it is nonetheless perplexing to see a well-known artist's, such as Willem Claesz Heda, work designated by the term "fruit" when it so rarely featured such subject matter. Perhaps the authors could have hazarded the use of the widely known terms "banquet", "tobacco" and "kitchen" to paint a more accurate picture than the term "fruit etc." allows. Further, when the authors expand their commentary in some lists, such as that under "fruit etc." for Hendrick van Heemskerck wherein fruit, breakfast and banquet paintings are enumerated, it is not clear why. This extra information is certainly welcome but should be uniformly available. A knowledgeable user of this book will navigate the inconsistencies but the casual reader may not be inclined to do so.

The biographies of the artists are written with an admirable economy and contain useful reference information on specific biographical points. However, for those wishing to do further research, a bibliography, when possible, at the end of each biographical sketch would have proven ideal. One of the real strengths of this book results from the decision by the authors to include and cross-reference variant names of artists. They also wisely supply erroneous and fictitious names past in their effort to correct mistaken identifications of the past, printing them in a different type (italics) so as to avoid confusion.

At the end of the book are six appendices of varying utility. By far the most intriguing and useful are the first two, which cover still life artists known to us only through their monograms, which are helpfully reproduced, or by some particular iconographic or stylistic feature distinctive enough to have earned a designation such as "Master of the Kitten". Fred Meijer prepared these two appendices. The other appendices include pupils not discussed in the dictionary, still life artists working in graphic media, miscellaneous records pertaining to still life and, incongruously, the slaughtered pig (or oxen).