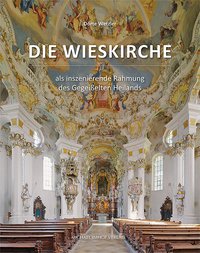 The rococo churches of eighteenth-century Bavaria must certainly count among the most magnificent achievements of European architecture. For anyone fortunate enough to experience one - the Wieskirche, Vierzehnheiligen, or any of the ones which are accessible to tourists and visitors - the experience will be unforgettable. Yet for all their impact, the recent scholarly literature on them is less plentiful than one might expect. There have been many studies written from the perspective of local and regional histories, a few standard overviews of the region and its art, and scholarly treatments of its important architects. There remain surprisingly few analytical studies of individual Bavarian rococo buildings. For that reason alone Dörte Wetzler's new book is a welcome addition to the literature on the Bavarian rococo and signals a new direction for studies of it.

Wetzler's analysis of the Wieskirche is structured around the idea of the frame, understood here less as a physical creation and more as a concept. The church as a whole is a kind of frame designed to curate the experience of encountering a small statue of the flagellated Jesus. It was this object, made by two local artisans for use in processionals, that in 1738 the widow Maria Lory believed she saw crying real tears. This event gave rise to a pilgrimage and, ultimately, to the commission for the Zimmermann brothers to build a church. In addition to understanding the Wieskirche as a frame, Wetzler also seeks to determine whether the church reflects Enlightened Catholic ideas. These were new applications of Catholic doctrine devised in part to respond to the ideas of the broader European Enlightenment, and generally took the form of downplaying the miraculous aspects of Catholic faith in favor of more practical forms of devotion (13). To explore this, Wetzler does something that surprisingly few scholars before her have done, namely look at Wieskirche's interior decoration in its entirely. This aim, rooted in the idea of the Gesamtkunstwerk, is important for all churches, but especially so for the Bavarian rococo, where decoration and architecture were conceived together to produce novel visual and spatial effects. The Wieskirche interior's purpose, according to Wetzler, is to structure the pilgrim's encounter with the statue and associate it with Catholic Enlightenment principles.

The book is divided into three central chapters. The first reviews the phenomenon of image veneration in post-Tridentine Europe. This then leads to a long central chapter, comprising almost three-quarters of the book, devoted to a systematic analysis of the church's interior. Wetzler links the subjects of individual pictures with their architectural context and derives from them a range of theological concepts. In some respects it is refreshing simply to read a close visual analysis of the church's interior imagery, much of which escapes close consideration in studies that concentrate on the Wieskirche's architecture. Wetzler also posits how these decorative choices affect the experience of the pilgrim who would have experienced this space in the eighteenth century, although she treats this pilgrim as an abstraction. To test her hypotheses, and particularly to isolate those aspects of the Wieskirche that are unique to it, Wetzler offers comparative discussions of similar or related churches, placed in separate sections within the text.

Many insights emerge from Wetzler's analysis. One is that it is difficult to link any specific formal aspect of the Wieskirche to its function as a pilgrimage church. Architectural developments associated with pilgrimage, such as ambulatories, can be found in many eighteenth-century churches regardless of intended function, while the formal variety of Bavarian churches mitigates against the idea that any single architectural arrangement served the function of receiving pilgrims better than any other. Another point, to my mind an important one, is that the Wieskirche's design has the effect of downplaying the miracle associated with the site by subtly transferring the worshipper's focus from the statue to more established, ecclesiastically sanctioned representations of Jesus. This has the result of placing the pilgrims' devotional enthusiasm under greater institutional control (77-79). Wetzler notes further that the interior is filled with ambiguities, something I also have noted in my research on this building, with the cumulative effect being to blend earthly and heavenly realms while insisting upon an active role for the pilgrim (81, 88, 205).

The third chapter, which forms the book's conclusion, gives Wetzler the opportunity to speculate on the sources of the church's interior program. She proposes that the minds behind it would likely have been the local abbot Magnus Staub, whom she credits with devising its broad iconographical content, but she further suggests that Staub was influenced or advised by the German-born theologian Eusebius Amort, resident at the time in Rome and an important shaper of Enlightened Catholic ideas (209).

This is a valuable book, one more concerned with confirming prior ideas about the Wieskirche than presenting an entirely new interpretation of it. One of its advantages is the rigorous consistency of Wetzler's analysis. She draws her conclusions not from scattered observations, but a strict argument based in close and comparative looking. Her analysis offers many possibilities for further thought. Wetzler's focus is largely on the church's figural content, not its ornament, and while the rococo receives some discussion, it is not her main focus. Exactly how rococo ornamentation contributed to the processes Wetzler describes could be expanded further. Likewise, Wetzler gives little sense of the actual people who visited the Wieskirche. The sources may not allow for eighteenth-century experiences of it to be reconstructed with precision, but surely not all pilgrims grasped the theological content of the church's decoration to the degree that Wetzler unfolds here. Rather than look to other Bavarian churches for comparison, there might be gains in thinking about the Wieskirche in light of developments in Roman Baroque architecture, which also dealt with the presentation of theological content and its legibility to pilgrims. What Wetzler provides here is a clear sense of what the Wieskirche interior actually does in iconographical terms, and with her insight, future scholarship can build on solid ground.