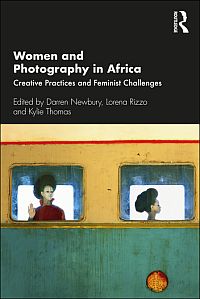 The academic essays, photographers' reflections, and archival recollections that make up "Women and Photography in Africa" close at least as many research gaps as they uncover. Not strictly written in an academic style, unlike much other literature on the medium, this volume enables the joint discussion between scholars and photographers. It further presents a long-overdue, extensive collection of current research on a field of study which has gained heightened interest in recent years.

Edited by three Europe-based academics, the book resulted from an exhibition and a related symposium titled "Photographs Beyond Ruins". [1] This context already indicates what the reading confirms: Throughout the book, the entanglement of photography, history and archives in Africa seems inevitable, leading Nomusa Makhubu to ask, "Is it possible to escape the confining circulation of colonial and apartheid images?" (246). The book comprises four sections with three chapters each and covers the period from the 1930s to the present in a fairly chronological order.

All authored by women, the chapters reflect on a great array of topics and geographies, though, as the editors admit, East Africa remains ignored and, with roughly half of the book fixing on South Africa, indeed a strong emphasis is put on the editors' own research areas. Covering only seven of the fifty-four fully recognised African states is arguably the book's weakest spot. Despite the cross-references to further literature, it cannot lay claim to a holistic examination of its subject. Hence, its title can rather be interpreted as the smallest common denominator of the individual essays, leaving ample leeway for new ways of thinking about photography and carrying on a shift of focus from images of African women to their engagement with photographic practices. Thereby, the visual material plays a decisive role not only as an illustration to the writing but also as an autonomous visual argument for the women's agency.

The introduction title "New Lines of Sight" alludes to the exhibition "Lines of Sight" shown at the South African National Gallery in 1999. Interestingly, one of its components concentrated on female photographers. In contrast to the 1999 display, which almost exclusively considered the works of white women, the volume, published more than twenty years later, opens with the example of the successful Ghanaian photographer Felicia Abban followed by the section "Writing women into photographic histories". [2] Two of the first chapters look at white photographers: Jessica Williams maps the biographies and works of three Weimar women and Inês Vieria Gomes examines the photographs of four Portuguese women, highlighting the importance of class in the colonial photography context characterised by anthropologic and touristic enterprises. Yet, most other chapters address the work of black women.

The subsequent section "Photographic dialogues with the past" touches on the intergenerational handling of photography, following Olubukola A. Gbadegesin's argument that "the process of recovering the personal and professional lives of African photographers is integral to redressing major lapses in photographic histories and lingering intellectual impacts of colonial inequities". [3] Dora Carpenter-Latiri's essay is particularly revealing as she juxtaposes her father's and her own photographs of Tunisian women taken between the 1940s and the present to disclose modes and conditions of image production and what these can tell about feminist movements. Any set meaning of the term "women" and how it relates to the camera is questioned in the section on "Gender and sexuality in photographic practice". Tina Barouti, for instance, dwells on the historically changing institutional opportunities for women to become photographers in Mali and the influence of a photographer's gender and age on image-production. The fourth and last section "Feminist and postcolonial practices" provides an outlook, which shows contemporary female artists' processing of historic imagery through animated film, performative photography and embroidery.

Importantly, the edited volume defines its key terms utterly vaguely. Women, photography and Africa remain loose concepts with various meanings shifting in different socio-political geographies. For example, the work of non-binary photographers and their use of the medium for community building are examined in Tina Smith and Jenny Marsden's reflections on their exhibition of photographs showing the queer community of Cape Town's District Six. In particular, the book deals with an extensive notion of photography, including the object of the actual photographic print, be it vernacular, fine art, documentary, self-made, found or a combination thereof, as well as the comprehensive and often gendered practices surrounding the production, storage, circulation and reception of images.

While the essays refer to diverse aspects of these practices, the editors seem to have set two particular foci. The first concerns the archiving and public disclosure of vernacular photography at the intersection of the private space and the sphere of fine art. This is best demonstrated by Lorena Rizzo's writing on photographic collections gathered and preserved by displaced women in Namibia and their inclusion in a travelling exhibition as well as Marietta Kesting's study on South African artists' use of family photographs to produce video art. The second regards the engagement with photographs beyond their mere visible features. While Tessa Lewin extends the discussion of photographs to what remains invisible in pictures, Anna Rocca considers not only visibility but also tactility as a means of knowledge-production in relation to the triangle of photography, archives and memory.

The book's publication coincided with the opening of a major retrospective of Zanele Muholi's photographic œuvre at Tate Modern in autumn 2020. Often mentioned as a key figure throughout the volume, Muholi's activism is at the centre of Lewin's essay. An anecdote from the online book launch is telling of the editors' motivations for the publication. When asked about the potentialities of a historical focus on photography, Kylie Thomas answered with a remark on the Tate exhibition, recounting someone's impression that Muholi had appeared out of nowhere despite the considerable existing historical background to queer visual activism and black female photography. If this edited volume has achieved one thing, it is to showcase crucial parts of this background, without obscuring the need for further research so that our archives reflect women's diverse past and present photographic practices on the African continent.

[1] The symposium took place at the Institute of Commonwealth Studies, University of London on 14 July 2017 which was the opening day of the exhibition "Usakos - Photographs Beyond Ruins" shown at Brunei Gallery in London until 23 September 2017.

[3] Olubukola A. Gbadegesin: "Photographer Unknown". Neils Walwin Holm and the (Ir)Retrievable Lives of African Photographers, in: History of Photography 38 (2014), no. 1, 22.