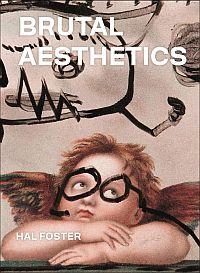 "For if Hitler and Auschwitz, Nazism and Guernica, Stalin and Hiroshima do not mean the end of art" wrote Arnold Hauser, "it is nevertheless unthinkable that they could have had no influence on the structure art took". [1] This book by Hal Foster, Brutal Aesthetics, is concerned with the repercussions of these events, and it is a bleak read. The volume charts how Jean Dubuffet, Georges Bataille, Asger Jorn, Eduardo Paolozzi and Claes Oldenburg pursued their work in the aftermath of World War Two, and forms the second part of a project that aims to reconsider the responses of the twentieth-century avant-garde in times of acute political trauma.

The artists are broadly defined by their violation of classical humanist ideals as a result of their failure to avert catastrophe. We commence with Walter Benjamin's notion of 'positive barbarism' which is taken to contend a type of survivalist modernism, stating that in the midst of ruin it is necessary for humankind to begin again, resisting the 'civilised' values which had produced such destruction (1). It would be the results of this barbarism that amount to what Hal Foster calls 'brutal aesthetics', an art of survival. Perhaps the main problem for this group was defining precisely how to 'start over' when even defining an adequate foundation for this intention was unattainable; seemingly there was no tabula rasa. As a result, the manipulation of "fractures" within official culture became the practice, employing subversion, debasement and disfigurement rather than achieving negation (23).

In the case of Dubuffet, his brutal aesthetic would manifest itself in art brut: high regard for art of the non-artist; that of the child, the mentally diseased and graffiti of the 'common man'. However, for Dubuffet, the attempts of these groups to abandon civilised values would prove ultimately futile. Art brut proved nigh on impossible to fully realise, as it tended to acculturate and merely prove temporarily disruptive. Art brut or the quest to inhabit a space beyond and untouched by culture was defined by Dubuffet as an art "that doesn't know its name" [2], hence his rejection of André Breton's view that art brut was a development out of Surrealism (257).

With Bataille, we see an enthusiastic return to prehistoric art and the embrace of darkness in the caves of Lascaux in the Dordogne region of France [3], today dated to between 15,000 and 20,000 BCE, which symbolised for him the origin of art. For Hal Foster, it was here that Bataille not only found a world far removed from the utilitarian and instrumental reason that gave rise to World War Two and its associated horrors, but also a vital outlet for human energies and a source of sacred encounters (100-101). Prompted by his experiences of the caves, Bataille made notes for a film; it was to remain unrealised but included the themes of ritual and violence, tracing the development and eventual annihilation of humankind. Life would again return, only to destroy itself yet again (71-72). The project would illustrate how the path of man between the bestial and the civilised could run both ways, these spheres not always clearly distinct.

The caves for Bataille became the location of sacrifice, ritual and an alternative to the social control of architecture that equally served as womb, tomb, or most ominously, a bomb refuge: "In a sense his cave is the opposite of Plato's: if we are enlightened at all, it is only in darkness and through darkness" (262). Bataille construes the animals on the cave walls as fulfilling roles of both beasts and gods, one below, the other transcending human law. It would be through the reclamation of sacred experience that Bataille hoped somehow to attain a new beginning, one that resulted in no more than one more reinscription of the law; in Bataille's terms, it was an "impossible" project (7).

In the work of Jorn and affiliated Cobra artists, it was through the animal and the 'creaturely' or that between man and beast that their work often manifested itself (106). In an attempt to salvage Nordic culture from Nazi degradation, Jorn posited it as a pagan alternative, derived from the peasantry and exemplified by the Viking, in opposition to the classicism and Christianity of Southern Europe with its aristocratic connotations (111). Jorn's work was at times collaborative, ranging from various projects including murals, texts and ceramic experiments, to the founding of the Situationist International with Constant Nieuwenhuys and Guy Debord in 1957 (135).

The theme of going beyond distortion, and butchering the classical continues with Paolozzi's work. Combining urban detritus and 'creaturely' effects, both the organic and machine appear irreversibly enmeshed and damaged. Even versions of archetypal figures such as Icarus and Saint Sebastian are reduced to rough assemblages with barely a human aspect: "Whereas technology sexed up the machine for the Futurists, it desexed the human for Paolozzi; whether the rough surface of his bronze figures suggests flesh petrified or machine fleshed, it is the opposite of a desired outcome" (171). This was an art born of The Second Machine Age, that of the 1950s, on the cusp of radical alteration as a result of electronic imaging and information (147). This state of mind was echoed in the thought of Hannah Arendt. In 1958 she voiced her fears in The Human Condition about increased mechanisation of work resulting in a reversion of humans to animal like states. [4]

Of our group of artists, the pursuit of an art free from the restraints of commodity culture is perhaps most pervasive in the work of Oldenburg. Arriving in New York in 1956, it was not long before he focused on the city's disordered urban landscape, including its filth and streets strewn with commercial refuse. For Oldenburg, Abstract Expressionism had begun to grow tiresome and his interest led towards found objects, assemblages and happenings (196).

Having exhibited a number of works from The Store in 1962 and garnering success, both critical and financial, an uneasy Oldenburg abandoned New York, moving to Los Angeles, to find that in the city of angels the detritus of production was nowhere to be seen and a more highly finished consumerist environment had taken its place (221). Reflecting this, his main LA project Bedroom Ensemble is free of the organic features present in his earlier work and a clinical rationale takes its place. Spaces designed for humans are presented as utterly inhuman, "If, not long before Bedroom Ensemble, Abstract Expressionism could claim to express a 'new man,' here there is no subject at all; literally no one is at home (the title suggests an arrangement without inhabitants, who would only sully it)" (223-224). Various attempts by Oldenburg to outpace the market force failed, and we end on a dark note. For Hal Foster, Oldenburg's time, as our own, offers no "redemptive last word" (247).

I expect those coming to this work will be well aware of Hal Foster's place in academia. A stalwart of October journal, he is strongly influenced by theory in the broad sense. Similarly, those readers are likely to be well acquainted with typical points of reference in this book: Benjamin on civilisation and barbarism, his best known essay 'The Work of Art in the Age of Mechanical Reproduction', Adorno on poetry after Auschwitz and ubiquitous Freudian ideas. Although relevant, this writer found it somewhat disappointing that there was not more on the lesser known areas of work from such renowned figures. As the artists had their own contradictions, so too Hal Foster. When his politics come through in trite lines like "the dark forces of capitalism" (247), his stance is difficult to reconcile in the context of his funding "entanglements" with the Mellon family which he recognises (249).

As acknowledged by the author, the earlier post war years have been neglected by his generation, who reacting against formalist modernism, have tended to concentrate on the later fifties onwards, emphasising the neo-avant-garde and postmodernism (23). For this reason it is heartening to see an academic art historian of Hal Foster's calibre turn his characteristic erudition more towards the kind of painting and sculpture in this book. Hal Foster's research sets the figures in context, compares them in an original way and skilfully manages to identify common aspects of their work. For those interested in modern art, intellectual history and politics of the cold war era, this book comes strongly recommended. There is also a detailed notes section that includes some unfamiliar and thought provoking further reading.