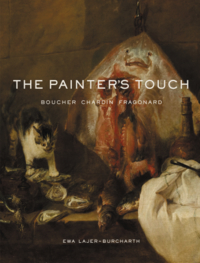 In her new book, Ewa Lajer-Burcharth sets out to reassess the work of three artists central to the canon of eighteenth-century French painting. Despite their prominence, she argues, the distinctive achievements of François Boucher, Jean-Siméon Chardin and Jean-Honoré Fragonard have not hitherto been properly understood and appreciated. Lajer-Burcharth takes as her starting point the notion of the individual 'touch' of each painter, his unique manner of handling his medium, which was widely deployed by writers on art at the time. Rather than seeing the touch as the natural expression of an artistic personality, however, she characterises each painter's individuated mode of practice as a form of artistic self-fashioning. Her central contention is that all three strategically deployed the material and technical aspects of picture-making for the purpose of professional and personal distinction. Lajer-Burcharth also draws a connection between the artists' investment in their own painterly practice and contemporary sensationalist philosophy, exemplified by Condillac's Traité des sensations (1754), which foregrounded the role of touch in perception and cognition as well as in the formation of the subject. More broadly, she suggests that their (in every sense) materialist mode of self-realisation constitutes an aspect of the Enlightenment invention of the individual.

The opening chapter builds on the recent reassessment of Boucher by scholars such as Melissa Hyde, who have emphasised the modernity of his artistic practice. Lajer-Burcharth identifies the overriding quality of the painter's touch as his tact, a term that defines his readiness to accommodate himself to the demands of another. Forged during the early part of his career when he was employed in copying the work of Antoine Watteau, this quality made of him a supremely commercial artist, one willing to adapt and recycle his designs as the market demanded (whether in the form of painting, drawing, prints, tapestry or porcelain). At once endlessly various and always recognisable, Boucher's pictorial practice served as the model for an entire style of luxury production. Moreover, the seductive surfaces of his female-centred mythological paintings, which equate erotic encounter with material possession, construct a distinct model of subjectivity, a consuming self caught up in a commercialised culture of appearances. Similarly, a genre scene like La Toilette testifies to the way that commodity consumption transformed subjective existence among the Parisian elite. On the one hand, the accumulation of possessions here personalises the domestic interior, which thus becomes an image of the self, while, on the other hand, this self puts itself on display as an object for the gaze, narcissistically performing for an imagined audience, like the heroine of Marivaux's La Vie de Marianne (1731). Full of perceptive insights, this chapter makes a compelling case for Boucher's work as the product of a 'commercial imagination', a term that nicely balances the economic conditions of his practice against his self-invention as an artist.

In the chapter on Chardin, Lajer-Burcharth seeks to challenge recent contextualising accounts of the artist's work by insisting on the 'deep materiality' of his painterly practice. She has in mind here the long-drawn-out working process that left its trace not just in the richly textured surface of the canvas but also in the many reworkings of the composition visible only through radiography. Accordingly, the defining quality of his touch is said to be his craft, which is associated not simply with his artisanal background but also with a more general re-evaluation of the processes of making at the time. However, Lajer-Burcharth construes the depth of Chardin's paintings in psychic as well as physical terms, with reference primarily to the artist's own inner life. At times, there is a tendency to lapse into psychobiography, as when she suggests that he struggled to assert himself as an artist in opposition to his cabinet-maker father. Nevertheless, it is hard to resist her bravura analysis of Chardin's ambitious early still lives, La Raie and Le Buffet, as deeply-felt testaments to his hard-won identity as a painter who bridges the domains of lowly craft and high art. More problematic is the interpretation of the domestic scenes in terms of Chardin's ambivalent projection of his own identity as a figure painter onto the female figures who dominate these pictures; for one thing, it relies on an unduly negative reading of their presence as at once spectrally blank and sternly disciplinarian. By contrast, the section dealing with the pictures of children solemnly at play beautifully exemplifies Lajer-Burcharth's broader claim for the alignment of the painter's tactile experience of his own practice with a nascent self-awareness bound up with the sense of touch.

The final chapter proposes that Fragonard's work and career were characterised by a commitment to eros that makes him a far more interesting and innovative artist than was recognised in his own lifetime. Taking Foucault as her main point of reference, Lajer-Burcharth argues that Fragonard's paintings provide a striking instance of the way that, in modern western culture, sexual pleasure comes to be bound up with self-definition. The extraordinary dynamism of his canvases is persuasively read as embodying a materialist understanding of both human desire and the natural world as self-propelling forces, activated from within, with particular reference to Buffon's Histoire naturelle (1749-67). Exemplary in this respect is the Louvre Bathers, in which, as Lajer-Burcharth observes, the paint surface seems to have a life of its own, making the women's bodies and frothy foliage surge up together onto the canvas. She further contends that Fragonard identifies the active force of nature with a maternal figure, thereby associating picture-making not simply with sexual pleasure but also with the generation of life. The late eighteenth-century fascination with the reproductive capacities of the female body undoubtedly makes such a reading plausible; less historically grounded is the associated claim that Fragonard's own artistic identity is an infantile one, authorised by the maternal object of desire. It is a pity that no reference is made to the concept of genius, which served at the time precisely to align artistic creation with the energy and spontaneity of nature; it is also surprising given Lajer-Burcharth's acknowledged debt to the late Mary Sheriff, who analysed Fragonard's virtuoso fabrication of genius in his fantasy portraits, which are also discussed here.

In sum, The Painter's Touch is a tour-de-force of close looking that both draws on and sets itself against recent art-historical scholarship dealing with the early modern period. It clearly owes something to the materialist turn in the humanities, as is acknowledged, but no reference is made to any of the relevant literature. Lajer-Burcharth's principal methodological commitment is rather to psychoanalysis, though the debt is only really foregrounded in the chapter on Chardin, where she discusses André Green's account of the mother's role in the infant's subjective formation. She distinguishes her own exploration of the materialist formation of the artistic subject from such standard interpretative models as the notion of style; the absence of a chapter on Watteau in any case effectively signals her rejection of the category of the rococo. More ambiguous is the status of socio-cultural contextualization in this project; though the book contains many passages detailing such topics as the eighteenth-century luxury trades and changing conceptions of nature, context simply fades from view elsewhere, most obviously in the chapter on Chardin.

Finally, what vision of eighteenth-century French painting is the reader left with? On this point, it is telling that Lajer-Burcharth opens her book by asserting that Boucher, Chardin and Fragonard have all been regarded as major artists since they were 'rediscovered' by the Goncourt brothers. (In fact, recent scholarship has shown that the reputations of all three were securely established well before the publication of the Goncourts' essays on them in the early 1860s). Although more selective than L'Art du dix-huitième siècle (which also featured Watteau among others), The Painter's Touch bears a certain resemblance to the earlier work, not least in being devoted to great male artists whose work attests to an enduring fascination with the female figure. According to Lajer-Burcharth, the artists' dependence on femininity has the effect of undoing conventional gender hierarchies, but, given the almost total absence of historical as opposed to depicted women from these pages (only Mme de Pompadour gets more than a passing mention), creative agency as such remains in the hands (quite literally) of men.