The collective partner institutions of the Consortium for Art-Historical Picture and Photographic Libraries (AKBF) strive for the consolidation of their network of excellence, aiming for the development of a strategy for the future of picture and photographic libraries in the digital age. The focus is on the construction of an infrastructure for the digital presentation of photographic material as well as on establishing methods, techniques and standards for archiving, indexing and publishing photographic collections for education and science.

Nowadays, the preservation and indexing of cultural assets as well as their digitization and facilitation of their availability in the digital space rank among the core tasks of libraries, museums and archives.

Resulting difficulties and consequences with regard to visual media are frequently underestimated. Technical challenges and complex legal questions make it harder for many collecting institutions to become active themselves. This often leads to isolated results that do not meet dynamically developing professional standards.

Against this backdrop, the AKBF unites existing competencies in the fields of indexing and digitization.

The following institutions belong with the consortium, exisiting since 2004:

Beyond maintaining their collections, these members - as high-performance documentation centers - provide their collections in the form of own as well as mutual online offers. Together they preserve more than 12 million photographs of art- and cultural history, of which roughly 3 million are, in accordance with Open Access provisions, already available online via the respective research portals - for example via the portals „Bildindex der Kunst und Architektur“, „Deutsche Fotothek“ or „Kulturelles Erbe Köln“.

The consortium's particular strength lies in the establishment of standards and recommendations for best practice as well as for the development and maintenance of research-oriented infrastructures. Ensuing from art- and cultural history, these potentials can be utilized interdisciplinary.

The AKBF members' common key task is the coordinated collection, preservation, indexing, mediation and exploration of image documents. These documents are existent in different forms of media, such as photographic negatives, diapositives and paper prints, which are being continuously digitized, as well as in the form of originally digital photographs ("born digital").
The collections' core stock consists of photographs with relevance in art- and cultural history. These photographs document European architecture and artworks: historical monuments and their furnishing as well as mobile artworks that are kept in museums and graphic collections, or made an appearance in art-dealing.

Recently, the status of photographic material in the academic discourse has changed. Due to the transition to digital images and digital storage media it has become evident that photographs are not only a means of documentation but also have to be treated, protected, and explored as distinct cultural assets in their own materiality. This aspiration is, in regard to analog photography, represented by the "Florence Declaration" (2009), which is co-supported by the AKBF. Beyond their respective expertise, the institutions connected to the AKBF network unite general competencies in the fields of archiving and conservation from a technical and restoring point of view. With this, the AKBF accounts for a paradigm shift in the science of art and cultural sciences - disciplines which increasingly turn their hands to the importance of media as a research topic.

Based on the formulated tasks and objectives, the Consortium for Art-Historical Picture and Photographic Libraries (AKBF) develops cooperation projects and raises third-party funds for their implementation.

The consortium's spokesperson is the Deutsche Fotothek of the SLUB. 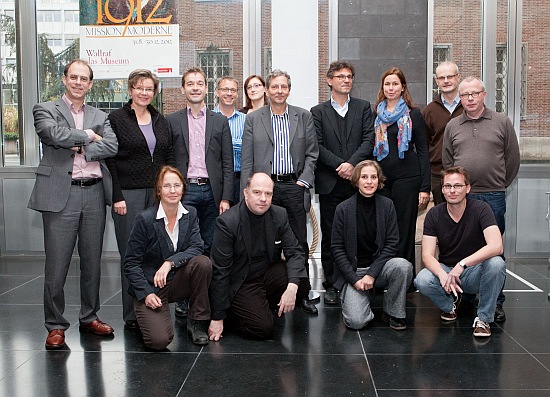