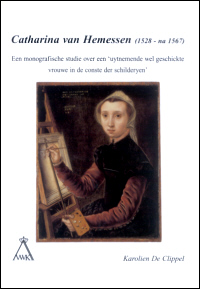 Only thirteen signed works survive - nine portraits and four religious paintings - from the hand of the sixteenth-century artist whom, in his description of the Lowlands published in 1567, Ludovico Guicciardini called one of the "outstanding women in this art [of painting] who is still alive.". The following year Giorgio Vasari mentioned her, and her name remained in circulation a century later when in 1643 Johan van Beverwijck included her in his Van de Uitnementheyt des vrouwelicken geslachts (On the excellence of the female sex). After four and one-half centuries of being relegated to a few lines or at most a few pages in texts on other artists or subjects, 2004 witnessed the appearance of not one but two monographs on the Flemish artist Catharina van Hemessen (c. 1528 - after 1567). [1]

In the exemplary monograph here under review, Karolien De Clippel divides her study into three chapters: The first two cover Catharina van Hemessen's life and work. The third chapter tracks a critical history of the artist and, in the process, provides a superb overview of the rhetoric and reality of the female artist in both art theory and in cultural practices. A detailed catalogue raisonné comprises the second half of the book, accompanied by 79 black and white illustrations and comparative figures. The extensive bibliography and index make this a useful reference work.

In the first chapter, De Clippel makes the most of the precious little documentary evidence we have about Catharina's life, enlarged by indirect evidence provided by documents concerning her father, the highly successful artist and dealer Jan Sanders van Hemessen (active in Antwerp, 1519-56), her husband Kerstiaen de Moryn, a renowned organist, and Catharina's paintings themselves. [2] From the age of twenty recorded on a self-portrait dated 1648, Catharina is assumed to have been born in 1528. She probably trained in her father's workshop. The household seems to have promoted artistic pursuits: of her four siblings, her sister was apparently a skilled musician, and three brothers trained as painters. As the commercial center of Northern Europe at the time, Antwerp must have provided resources and stimulation. At a time when only a handful of painters were able to make a good living from their craft, documents concerning the purchase of real estate and expensive porcelain indicate that Jan van Hemessen was highly successful, not only as a painter but also as a dealer. He apparently had social connections to match, from the wealthy burgomaster Adriaen Rockox to the court of Margaret of Austria. Catharina thus grew up in an environment that was economically comfortable, cultured and internationally aware.

The artist's earliest signed works date from 1548 when she was twenty. In 1554 she married the talented musician Kerstiaen de Moryn, who shortly thereafter became the organist of the Antwerp church of Our Lady, and subsequently court organist to Mary of Hungary. Of Catharina's ten dated works, only one originates from after her marriage, a Scourging of Christ dated 1555. When Mary of Hungary retired to Madrid in 1556, the couple moved with her. Because there is no documentary evidence of Catharina's activities there, De Clippel speculates that the painter may have served as a lady-in-waiting and perhaps art teacher of the filles d'honneur. Mary of Hungary died after only two years, and according to Guicciardini left the pair a life pension. The childless couple returned to Anwerp, and by 1561 they had moved to 's-Hertogenbosch where De Moryn accepted a position with the Illustrious Brotherhood of Our Lady. Catharina and her husband seem to have left the city by 1565, and subsequently disappeared without a trace, although Catharina is mentioned by Guicciardini as "still living" in 1567.

The second chapter considers Catharina's work. Apart from thirteen signed paintings spanning a brief seven years, De Clippel attributes three additional portraits and two religious paintings to the artist. While Catharina must have trained in her father's workshop, her unpretentious half and three-quarter length portraits bring to mind the work of the previous generation such as Quinten Metsys, Jan Gossaert, and Joos van Cleve rather than the works of her father; her three-quarter length figures suggest an awareness of the works of Antonis Mor, Frans Floris, or Willem and Adriaen Key. Her four religious works may be described as in the decorative and archaicizing manner of the Flemish Primitives.

Given that her name has not been found in guild records, that her works are of small size and modest compositional and technical ambition - the largest portrait measures only 39 x 29 cm (approximately 15 x 12 inches); her largest religious painting 75 x 70 cm (approximately 30 x 28 inches) - and that after her marriage she would not have needed to work for the income, De Clippel proposes that Catharina must have painted for the pleasure it afforded her, primarily for family members and friends: it is notable that two-thirds of her portraits represent women; only one pendant pair of man and wife survive. The dress of her sitters indicate that they were middle class citizens, rather than members of the court or aristocracy. De Clippel suggests that her religious paintings were made as decoration for homes, providing personal moral exempla, and do not reveal a particular religious persuasion beyond the general trends of the counter-reformation and humanism in circulation at the time.

Nonetheless, Catharina appears to have begun her painting career with a certain amount of self-consciousness, if not ambition: her well-known Self-Portrait at an Easel (Kaapstaad), created when she was twenty years old, is dated 1548 - the first year for which we have dated paintings - and survives in at least two autograph versions (and one copy in St. Petersburg). Elegantly dressed, the artist shows herself at work on a portrait. Much has been made of this painting by art historians, for it is the earliest known self-portrait of an artist painting at an easel in the history of European art. De Clippel suggests that rather than making any elaborate literary reference as some scholars have proposed, Catharina is celebrating the practice of portrait painting - customarily held in low esteem by art theory - as a liberal art. At the same time De Clippel believes that the artist provides a kind of visiting card, presenting herself, her genre, and her painting style as well as connecting herself to the social position of the well-educated lady, among whose talents number painting. The Latin inscription in Roman letters evidences a certain amount of education, or at least pretension to education: "EGO CATERINA DE/ HEMESSEN ME/ PINXI/ 1548"; an autograph replica (Basel) gives her age: "ETATIS/SVAE/20". The author suggests that one of the versions may possibly have been made for Mary of Hungary. While other painters would shortly also present themselves in this fashion, including Dirck Jacobsz (c. 1550), Antonis Mor (1558), Sofonisba Anguissola (c. 1566) and Lavinia Fontana (1579), to date, Catharina's Self-Portrait remains the earliest known.

Guicciardini's praise aside, Catharina van Hemessen was singled out by her contemporaries not so much for the quality of her work as for being that rare creature: a female painter. The third chapter moves beyond the monographic format to provide an excellent summary of the historical discourse of the female artist, comparing and contrasting this with empirical fact. Female artists were considered unusual, because woman was understood by nature as subordinate to man both in talent as well as in social practice. Nonetheless, Guicciardini and others noted that northern women had more freedom and privileges in commerce than those in his native Italy, a fact now borne out by empirical studies by contemporary scholars including Katlijne van der Stighelen, Els Kloek, Martha C. Howell, Lynn F. Jacobs, Elizabeth Honig, and Paul Vandenbroeck.

The catalogue raisonné divides paintings into those which are signed, those attributed, and those of doubtful authenticity. Each painting is documented as far as possible, and extensively discussed. Traditionally Catharina's oeuvre has consisted of ten signed paintings; of these, De Clippel has removed one Self-Portrait as a copy, she added a portrait pair, as well as two religious paintings. The present location of three of these works remains unknown, so while the extensive discussion of each painting in the catalogue is exacting and extremely helpful, more light may be shed on Catharina the painter if and when these works become available for first-hand study. Karolien De Clippel has, however, provided us with a marvelously nuanced account of both the artist, a talented amateur, and the role of the female painter in art theory and practice of the Early Modern Period.